On the 26th of February, we were delighted to invite Dr. Naya Mondo, one of the newest members of our Kenjin-Tatsujin International Advisory Council to the 2019 AAI International Tsudoi in Japan. Dr. Mondo, who lives between her natal home of Kenya and the USA, generously donated her time and energy to travel to Tokyo and participate throughout the entire tsudoi. One of the highlights of the event was her speech, entitled “Connected Possibilities”, where she offered herself as an example of how Africans living overseas can return to Africa and contribute to its economic and social growth, even without strong connections back home. She emphasized the importance of creating one’s own network, combining it with a clear plan driven by honesty, integrity and plenty of hard work.

“I’ve had the opportunity of a lifetime to see the world from different perspectives […] still, Africa was calling me back”. Dr. Mondo began her speech talking about her academic and professional career, which allowed her to visit various countries and develop her entrepreneurial mindset. But after succeeding abroad and receiving a number of awards, it was important for her to return home.

“She empowered me, because, like me, she left her home for higher education in a foreign country, but she still recognizes her culture.” –Millicent (South Africa)

In her talk, Dr. Mondo explained how, despite a successful career in the US – where, as an educator, she taught at all levels, from elementary school through university, including “teaching [American] teachers how to teach about Africa” – she felt compelled to engage more directly in Africa’s development. While working for a consulting firm assisting American companies interested in doing business in Africa, she witnessed the growing trend of investment towards the African continent. “The 1.3 billion people in Africa are a young population, so companies see big markets” she explained. “But,” she added, “they ignore so many individuals” who lack the resources to participate positively in Africa’s growth. “I wanted to bring a real change to that little boy and that little girl who still lives without light at night and cannot afford to get a good education.”

Dr. Mondo began taking a closer look at what is actually obstructing education on the African continent, and she learned that many families can’t afford formal education due to a lack of access to energy. “They use all their time and resources fetching water and looking for energy. The energy poverty especially affects women and youth. It means the inability to extend our work into the night; the inability to maintain better health care; the inability to achieve a higher standard of living that enables access to education and a brighter future”.

Dr. Naya Mondo during her speech

Although Dr. Mondo primarily saw herself as an educator, providing energy to Africa became her new mission. “I had absolutely no background in energy, so I had to spend lots of time with books!”.

She continued to research and started talking about her idea with everyone in her network. She knew that by connecting all the “possibilities” she had accumulated in her life – her experience, her vision, her network of friends and associates – she could find the right combination to succeed.

Aiming to turn her vision into reality, in 2012 Dr. Mondo together with her advisor  Elizabeth Mwangi, an IT specialist, established Elerai Global Services – the only company in East Africa that is 100% women-owned. Elerai’s mission became to provide solutions for energy poverty, and Dr. Mondo’s network soon yielded a German solar-panel provider, which resulted in a trademarked SolarWifi solution and patent-pending products for off-grid internet connections and other applications.

With a clear vision in mind and the right partners, Dr. Mondo had to reach out to new potential customers and connect with regulators. Establishing her business in Africa was different than what she expected. The context presented numerous challenges, most of which are not addressed in American universities.

Frequent trips into the field meant not being able to charge her phone for long periods, especially when stuck in Nairobi’s traffic. Even in the city, common blackouts threatened her ability to keep communication channels open with her partners across the world. But her own product turned out to be a useful tool for her business. “In Africa now, I always carry my own SolarWifi, because wherever there is sun, it works.” 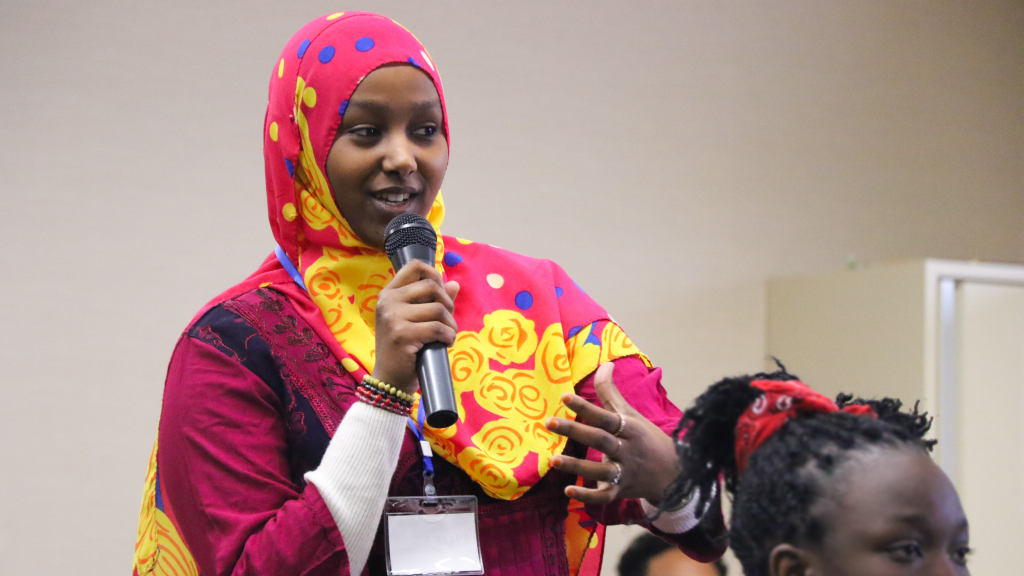 “Her lectures were pedagogic. I’m a young woman, and she really motivated me by showing how success can be earned without regard to gender. I was empowered.” – Ayesha (Somalia)

“The reality of starting a company in Africa can be very complicated, such as: finding a real solution that will really work on the continent; finding a partner that really believes Africa is a solid case scenario; and doing business within the boundaries of so many constraints”. Her research brought her to Rwanda. This country seemed the best option for Elerai’s work for various reasons. Firstly, its 2024 vision to electrify all Rwandans opened up many opportunities. Secondly, Rwanda is known for its ease of doing business. Lastly, its proximity with Kenya made it a good fit for a later expansion to Dr. Mondo’s own country.

Doing business requires careful interactions too. Entrepreneurs must be sensitive and respectful. After so much time abroad, Dr. Mondo was careful about re-entering Africa, not wanting to come across as the know-it-all with foreign education, telling people what she thinks they need. She quoted the Indigenous Australian artist and activist Lilla Watson, speaking at the United Nation World Conference on Women in Nairobi, in 1985. Watson famously commented on foreign aid: “If you have come here to help me, then you are wasting your time. But if you have come because your liberation is bound up with mine, then let us walk together”. Dr. Mondo recalls this statement every time she goes to a new community, making sure her purpose is to work together with locals rather than teaching them what to do.

“She also spoke to us about intimate intercultural issues and related the situation more globally. I think that was a spark in her teaching.” –Racheal (Uganda)

An important message she emphasized during her speech was the importance of a concrete plan of actions and solid research. She warned not to focus on fundraising prematurely and not to rely on money to solve problems. It is by thinking about solutions that she decided to invest in solar energy to provide access to reliable energy to the needy. “The sun is everywhere in Africa!”. Having ideas is an important first step, she said, but without solid groundwork, researching solutions and designing a realistic plan, and without conducting proofs of concept to demonstrate feasibility, no one will pay serious attention to you.

Addressing the Scholars interested in the private sector, she stated that “What Japanese companies entering Africa lack the most is local knowledge — people familiar with the cultural context and languages of Africa and also the cultural context and language of Japan.” The time to create your personal network, which will support you in the future, has already started.

Dr. Mondo explained that hundreds of companies and billions of dollars are moving towards Africa now, and the numbers are growing steadily. To maximise profits, many enterprises are even willing to bend the rules. But she argued that “Japanese companies don’t like to do business that way. They prefer to base their business on quality and reliability. They make good partners”. That is also why Elerai has recently partnered with a Japanese firm that makes thin, lightweight and flexible sheet solar panels, “to create newer products that meet the growing demands of Africa.”

Dr. Mondo concluded her speech with a strong message for those Scholars with entrepreneurial ambitions. “You have an opportunity right now, as Ashinaga Scholars. You have the support of Ashinaga and the resources they offer, including the opportunity to engage in proposal writing and project development. Do your best to use those resources. Make it work no matter what. Learn the language of your host country; understand how they do things and why it has worked. Volunteer. Visit companies that are in the areas of your interest. Ask for a mentor. Don’t ask what other people can do for you if you haven’t already tried yourself”.

Dr. Mondo’s speech was followed by a Q&A section with the AAI Scholars and she agreed to stay for the whole duration of the tsudoi. Scholars showed appreciation for her active participation in the programme and were inspired by her story.

“My takeaway from her was to at least start to implement ideas, and only then ask for advice. Many would-be entrepreneurs ask for advice to avoid doing the groundwork or just for the sake of asking, and they end up not doing anything at all.” – Rajoo (Mauritius)

We feel honoured to have Dr. Mondo in our Kenjin-Tatsujin International Advisory Council and we look forward to working with her again in the future. 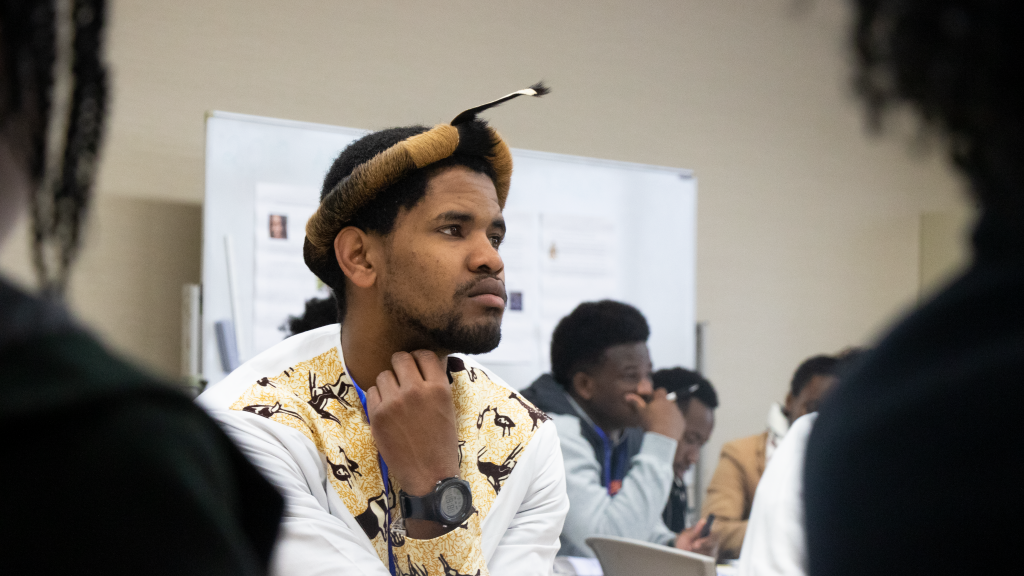 “My encounter with Dr. Mondo fueled my fires and desires for a leadership position in AISA (Ashinaga International Students’ Association). Her presence breeds love, encouragement and warmth, while cultivating a learning atmosphere. From the few encounters that I’ve had with Dr. Mondo I learned that a woman can still be feminine and powerful at the same time.” Bongekile (Kingdom of Eswatini; new AISA president)